When you start Librum, you need to change your fundamental expectations of what being a mage looks like in Skyrim. Though the magic of Librum can be described as low magic , it is equally apt to call it deep magic. As you’ll see below, the systems surrounding magic have been expanded upon greatly to introduce new schools and nuance to the casting of spells. Not only that, the process of becoming a mage isn’t assumed to have happened sometime before level 1, but rather will be a core focus of your playthrough should you intend to take up the esoteric arts. No longer will you be shooting flames from your hands from the moment you step into the world, instead you’ll be hitting the books (or paper rolls, in this case) to study magical artifacts and painstakingly research your spells. Did I mention you start with 10 Magicka Better bring some bodyguards along!

The process for obtaining new spells adheres to the Spell Research format. In short, spell tomes no longer exist, by and large, with the exception of certain hand-placed tomes. This means that you will need to research to discover each new spell, in one of three general fashions

Once you’ve learned enough about the spell archetypes you’re interested in, you can attempt to write magical theses and apply them towards gaining a new spell. If you are skillful, lucky, and not mentally drained, you may discover a new spell that fits the archetypes of the theses you wrote.

Now, there are several important gameplay consequences of this system. Existing mages will have an easier time learning new spells than new apprentices – if you don’t have any spells to start with (which may well be the case), you must study alchemical ingredients or artifacts in order to improve. Furthermore, as spell tomes are largely unavailable, you will have to make do with lower level magic than is otherwise the case; learning your first Adept or Expert spell, for instance, is a very difficult process.

On the other hand, Librum adds many new spells and classes of magic, organized loosely around the Mysticism framework. Mysticism itself rebalances all of the vanilla spells, and it adds a wide swath of new spells corresponding to those of legacy Elder Scrolls games. The list below gives some examples, but is noncomprehensive

Open X Lock. Instantly open any lock of the corresponding level. Mark and Recall. Set a location with Mark , and instantly teleport there with Recall. Absorb Health. Drain a target’s health pool, and restore your own the same amount. Weakness to X. Inflict a target with weakness to a given spell type. Reflect Damage. For X seconds, a percentage of received melee damage is reflected back at your attacker. Command. For X seconds, targets up to a given level are placed under your control. Slow Time. For X seconds, the caster’s perception of time is slowed by a given percentage.

Mysticism makes these effects – and many more – available in a number of different formats. This pairs particularly nicely with Spell Research, because each spell type is available in a variety of archetypes, and so the spells you discover are truly unique to your character. For instance, each elemental effect is now available in cloak, bolt, stream, on-touch, wall, and rune formats, each at several different magic levels. This means that, where vanilla only had the novice Flames spell in the stream format, Mysticism gives the novice Flames, the adept Greater Flames, and the (very well-animated) master Flames of Oblivion spells.

In addition, unique spells from previous games make a comeback. These range from Destruction spells like Finger of the Mountain and the fan-favorite Enemies Explode to unique Conjuration spells, allowing you to summon any type of weapon as well as various types of Dremora, Skeletons, and other creatures. Notably, through Magistrate Levitate, Morrowind-style levitation has also been reintroduced to the game. 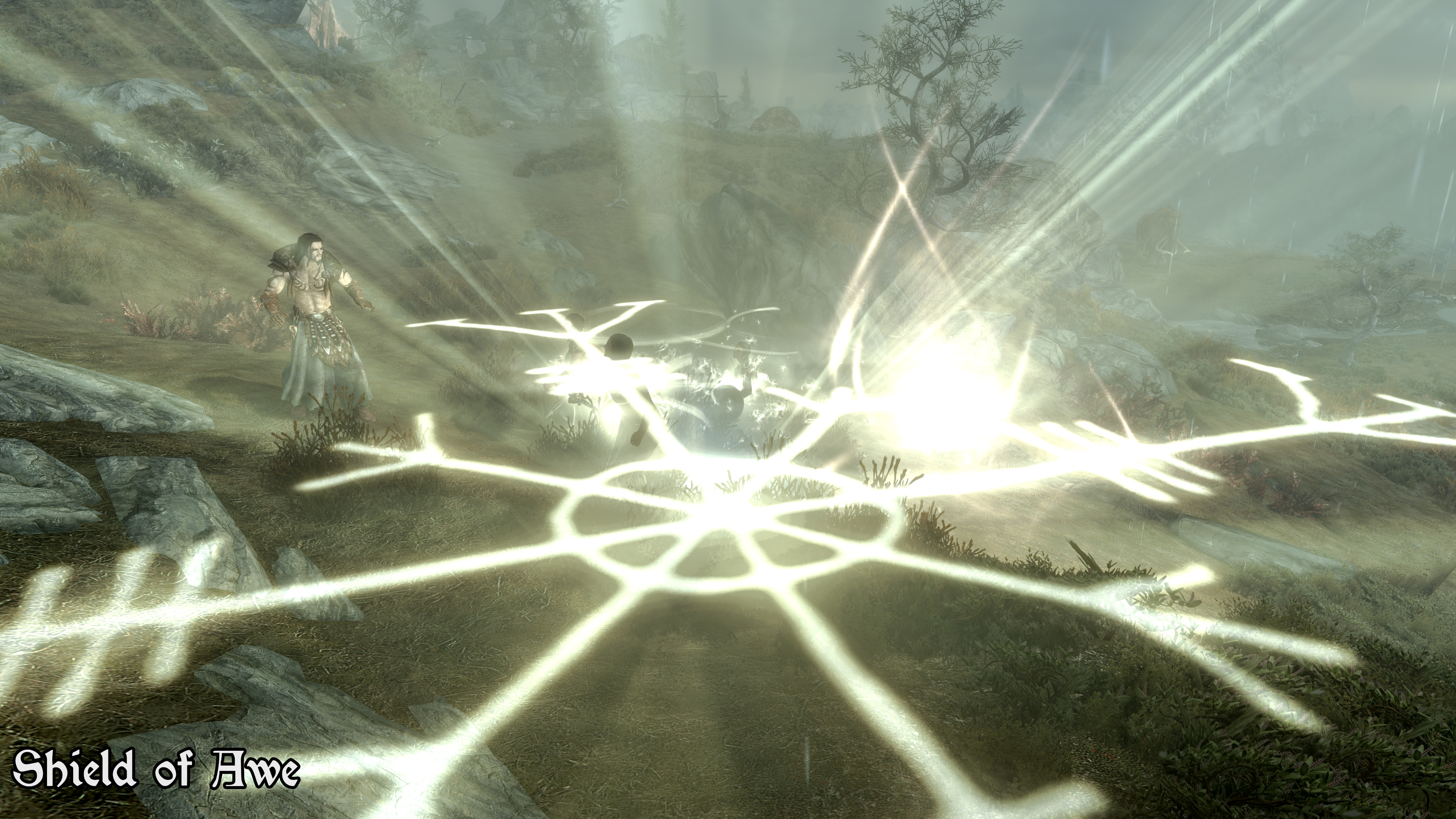 This is just the core of Librum’s magic offerings, however. Through the addition of several curated spell packs, Librum opens up many more-specific branches of magic

Earth, Wind, and ~Fire~ Water Magic. Cast the same Mysticism-style destruction spells for the elements of earth, wind, water, and poison, thanks to Elemental Destruction Magic. Certain enemies will resist or be weak to these elements, and Vokrii perks have been changed to reflect these new additions. You can also summon earth, wind, and water atronachs, in the same style as the vanilla elements, and you can apply enchantments that make use of these new elements.

Shadow Magic. Teleport through shadows, cloak areas in darkness or reveal important items in existing darkness, and draw power from the shadows around you, with Triumvirate’s expansive Shadow magic options.

Blood Magic. Use your health in place of your Magicka to cast spells, with Ace Blood Magic. You can also manipulate blood in the environment, with bleeding effects, blood-mists that can infect opponents, and defensive orbs or pools of blood.

Nature Magic. Follow the path of the druid, using nature-themed spell schools from Triumvirate and Forgotten Magic Redone. Draw power or healing from the environment, infect your target with damaging spores or poisons, or grow various damaging brambles, vines, or mushrooms around your opponent. You can also call unique animals to aid you in combat, or take the form of these animals to gain unique abilities.

Holy Magic. Call upon the Divines to aid you in your quest, using spells from Dawnguard Arsenal as well as Triumvirate and Forgotten Magic Redone. Sun spells have been expanded to match the other elements, but you can also bless your weapons in combat, protect and buff nearby allies, or summon divine weapons or guardians to fight on your behalf.

Shaman Magic. Triumvirate offers something for the follower of the ancient Nordic pantheon, as well. Summon Nordic totems to heal you or damage your opponents, consecrate your surroundings to gain an easily-accessible sanctuary, or look upon the land from the eye of a bird.

Celestial Magic. Applying the two spell schools from Cosmic Spells, you can unlock the powers of the Magna-Ge. Teleport targets through wormholes or draw them with gravitational force toward a summoned body, place Umbral Orbs or Luminous Crescents around the battlefield to extend your cosmic powers, or deal lunar or void damage to your opponents.

Daedric Magic. Through Triumvirate, Forgotten Magic Redone, and Zim’s Dremora Improvements, unlock the magic of the Daedra. Cast the same (now heavily-expanded) fire-based protection and Destruction spells as Dremora, summon all manner of new Daedra, or banish targets to Oblivion. You can also apply a whole selection of new curses, or bind enemy spirits into your summons for stronger effects.

In addition to the above list, Librum includes a ton of new miscellaneous spells – for instance, from Tentapalooza, Caranthir Tower Reborn or Immersive College of Winterhold , or from any of Librum’s many quest mods – that do not fit neatly into these categories. It also includes mods like Thunderchild , Summermyst , and Complete Alchemy and Crafting Overhaul , which, along with some of the mods from Librum’s other modules, allow for mage-tangent playstyles utilizing enchantments, alchemy, or shouts primarily.

Note that almost all of the above spells must be discovered on your own, through Spell Research. Because of this, you will naturally tend toward a specific magical niche (which may not align at all with the spell classes listed above), dependent on your experience in the different magic archetypes. In this fashion, Librum turns Skyrim’s vanilla eat a book magic system into a truly immersive research experience; you will be able to discover nearly any sort of magic you can imagine, but you need to dedicate yourself to studying the secrets of magic.

When it comes to actually casting spells, Librum also adds a new element of challenge in the form of FIZZLE. If your magic skill isn’t high enough to comfortably cast a certain spell, there is a chance that it will fail on the spot (but still drain your Magicka!). This is affected by other environmental factors, forcing mages to adapt appropriately to Skyrim’s harsh climate; for instance, if you are suffering from frostbite, your magic skills will be significantly reduced, and most of your spells will fail.

With Apoapse Arcana, which reworks Spellforge to work with Spell Research, a growing mage may find one of the five Spellforges within Skyrim. Unlike the default in Spellforge players cannot place or move these, their locations are static and you will need to remember the location and return to continue using them. Who or whatever constructed these sites are forgotten and of interest only to historians now. But with them any mage with the time and inclination to learn can begin to construct spells faster and easier than they could while armed only with a research journal. Now you can use rare materials to speed your spell acquisition process. Anyone eager to use these ancient forges should be cautious though. These sites are fragile and tampering with aspects you don’t understand may lead to unfortunate outcomes.

When it comes to Enchanting your own magical items of power, the list includes Enchanting Awakened to further provide avenues of specialization and complexity to the experience. There are now three schools of Enchantment Aether, Chaos, and Corpus. A fledgling enchanter must choose which path they will go down carefully as they are mutually exclusive. Soul Trapping has become a more central focus to the life of an enchanter, with the vast majority of soul gems in the world now coming unfilled. Several additional tweaks have been made to enchantments themselves, and if you wish to produce powerful items you will need to invest valuable perks in your chosen specialization.