Last but not least, Librum includes a full graphical makeover of Skyrim. The goal is to match the photorealism we are used to these days, but with a bend towards realizing Librum’s dark, gritty, and foreboding nature in Skyrim’s atmosphere. Perhaps most important for this end, Librum includes a suite of literal atmosphere mods, centered around a Frankenstein-ing of Obsidian Weathers and True Storms: 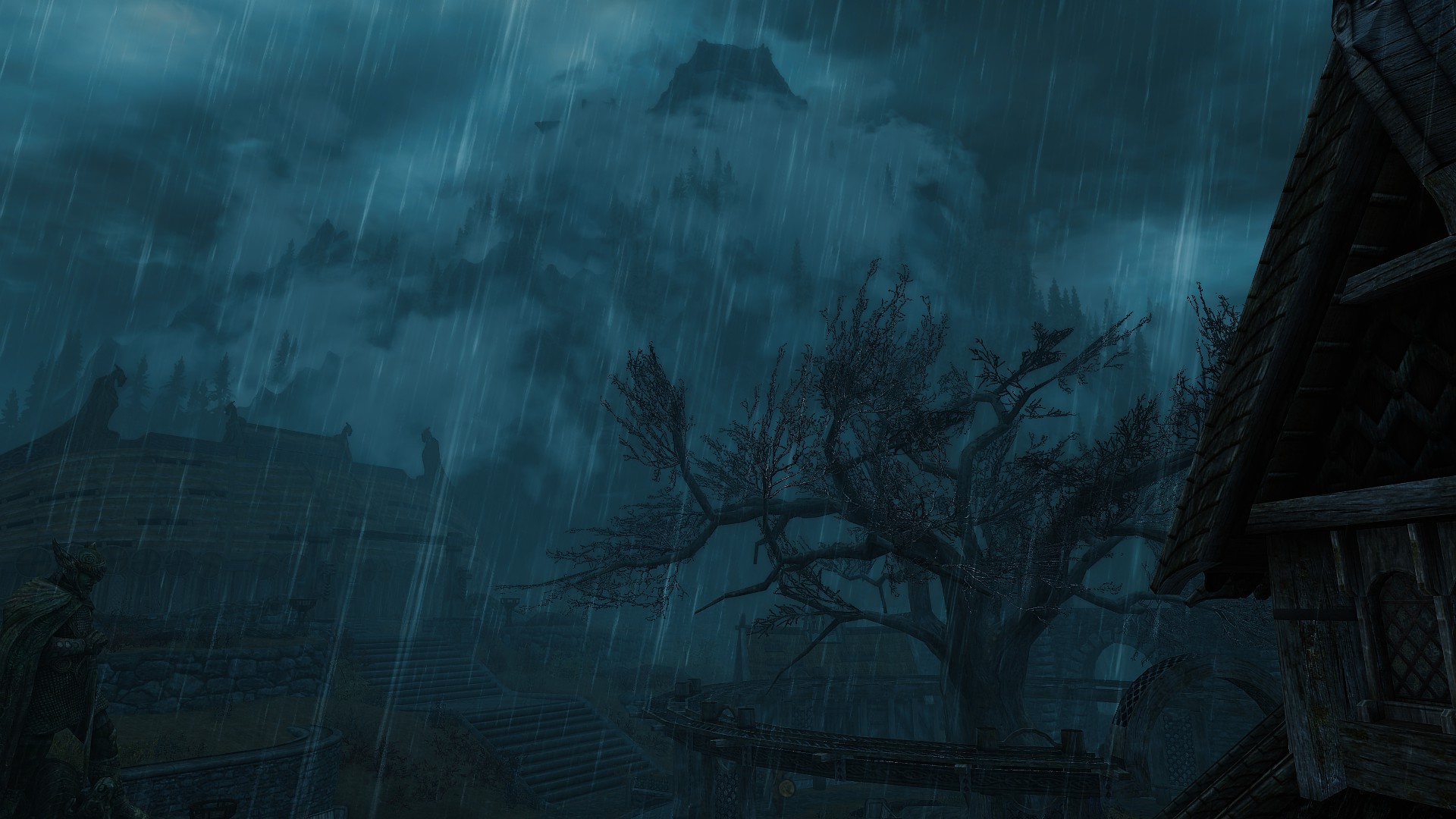 We top this off with several lighting mods:

The above only gives a small taste of the various atmosphere and ambience mods included in Librum – you can visit the manifest for a complete list, but Librum includes everything from new dust effects to better cloud textures and even better sound dynamics. 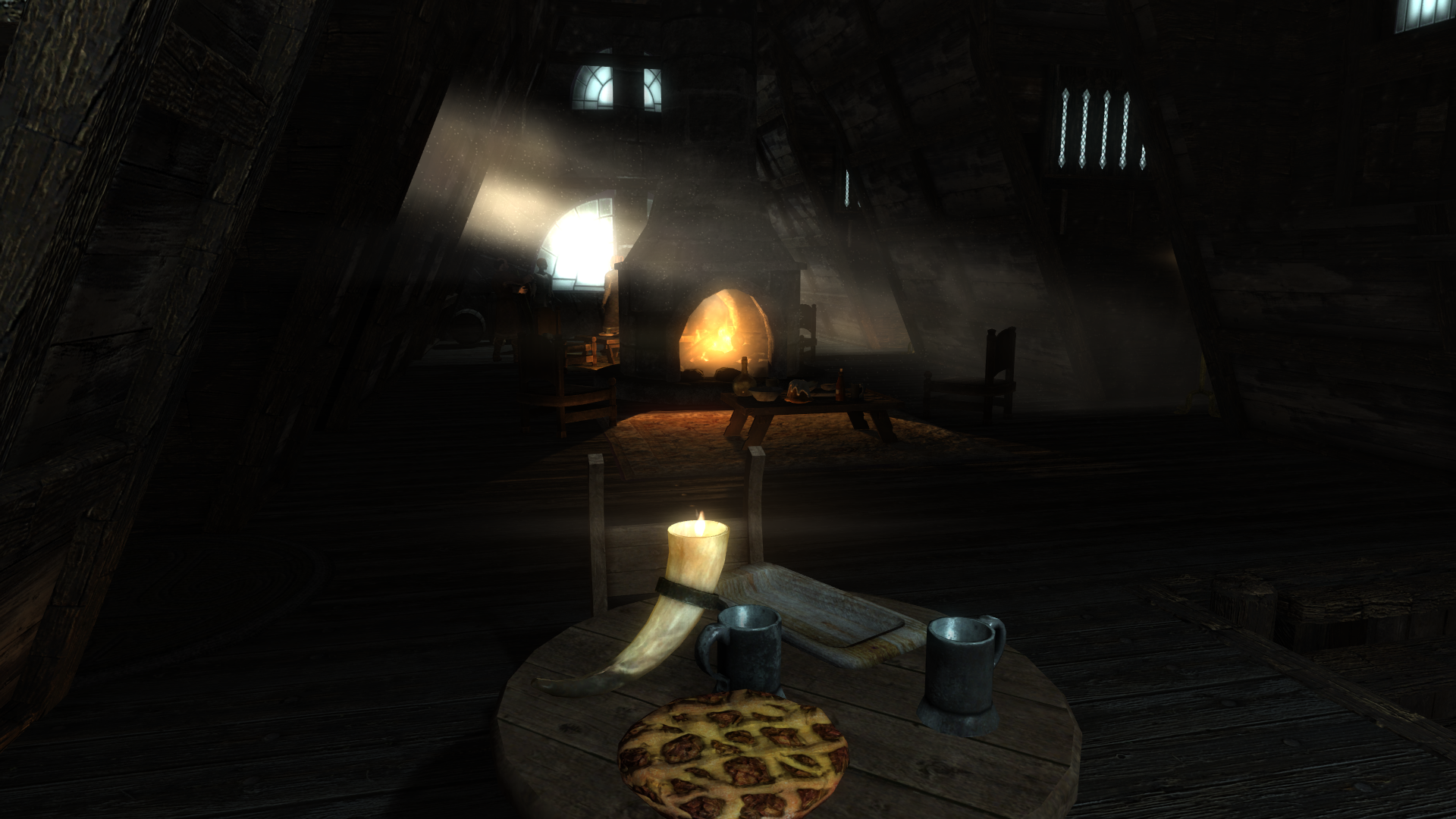 As we have become accustomed to, Librum also overhauls everything graphical about Skyrim, its world, and its inhabitants. Although I will not cover every detail of this graphical redux (see the manifest for a complete list), I will touch on some of the points that add to Librum’s unique, gritty feel. 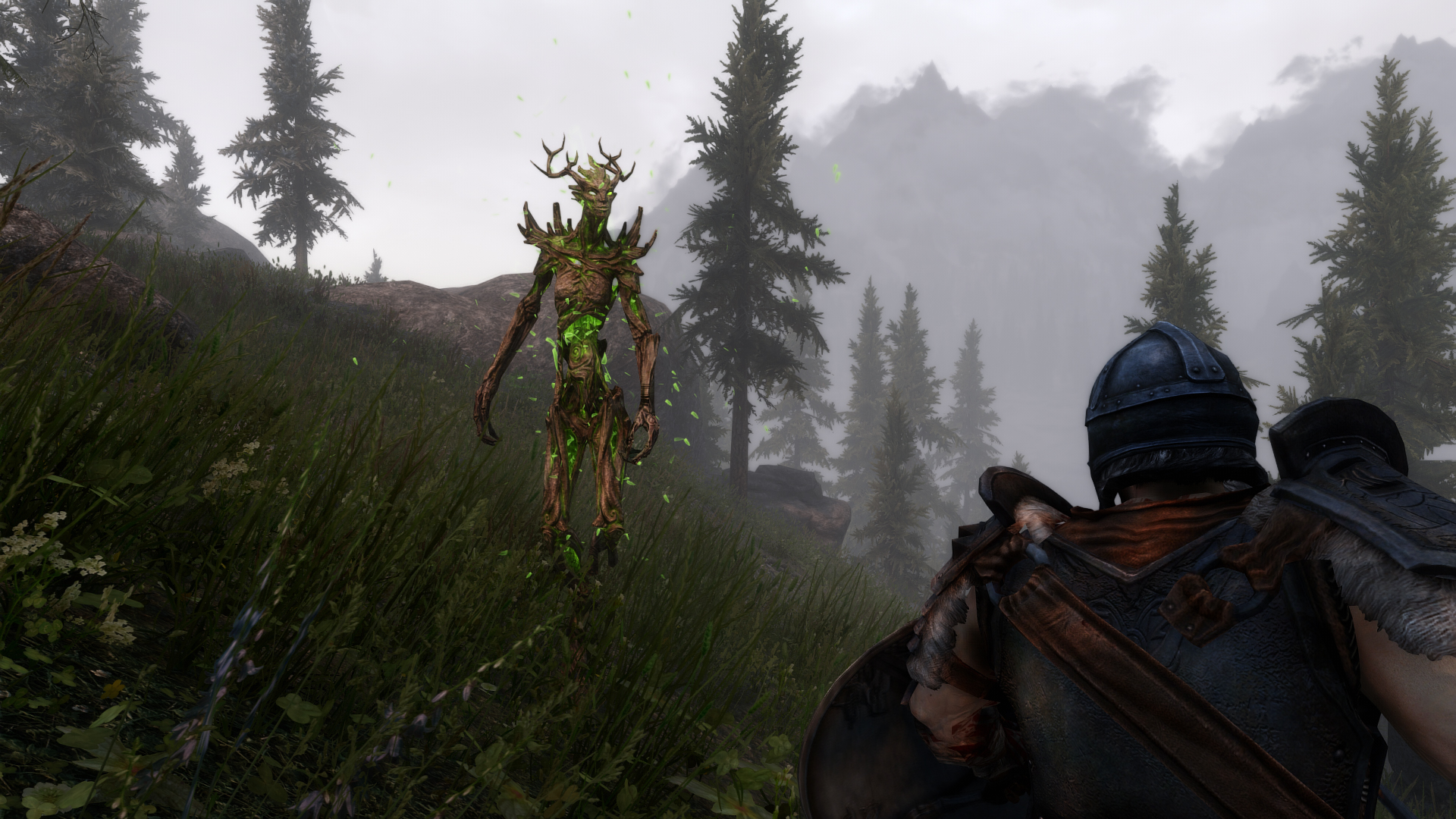 Another interesting addition to Librum comes in the form of Frozen Electrocuted Combustion. This mod adds bodily repurcussions to magic and elemental effects of all kinds. Fire may burn an opponent’s skin right off, or just leave a nasty scar. Shock can cause spasms, or many worse effects. Frost can freeze an opponent solid – striking a frozen foe will break them into several pieces. Effects have been added to everything from Fear to Soul Trap, so see the mod page for more information. In general, these new effects make the battlefield a grisly sight, and they make you think twice before zapping a fellow human person with Lightning Storm. 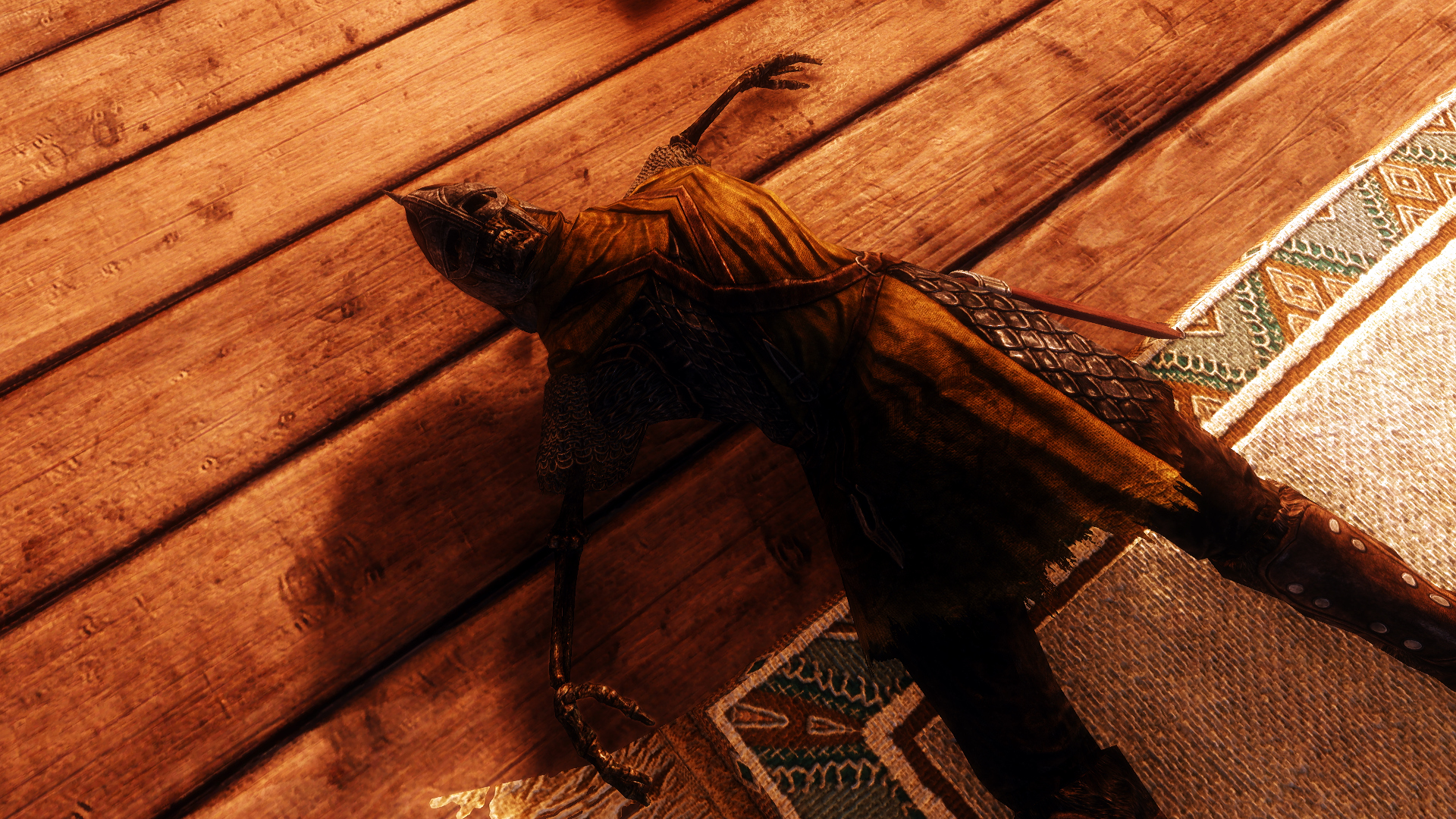 Finally, one of my major goals of Librum was to make the existing Skyrim content feel new and different. As such, Librum completely redoes every town and city in Skyrim, from large-scale architecture and layout changes to a re-imagining of citizens’ AI, all towards the end of making Skyrim a natural-but-exciting place to be.

On the town-and-city level, Librum combines the Great City series (except for Winterhold, for compatibility) with Dawn of Skyrim and Cities of the North: Dawnstar, Winterhold, and Morthal. It also includes the minor mods in the Great City series: Solitude (docks), Karthwasten, Old Hroldan, Ivarstead, Shor’s Stone, Mixwater Mill, and Kynesgrove. We also have Kato’s Riverwood, and Rorikstead Basalt Cliffs. For Solstheim, I have included Better Tel Mithryn and Quaint Raven Rock.

Not only do these city improvements make the cities denser, livelier, and more realistic – they also give each city, town, and hamlet its own unique character. Instead of the “see one, see them all” nature of the towns in vanilla Skyrim, each of Skyrim’s villages has its own architectural style, its own industry, and its own landscape. 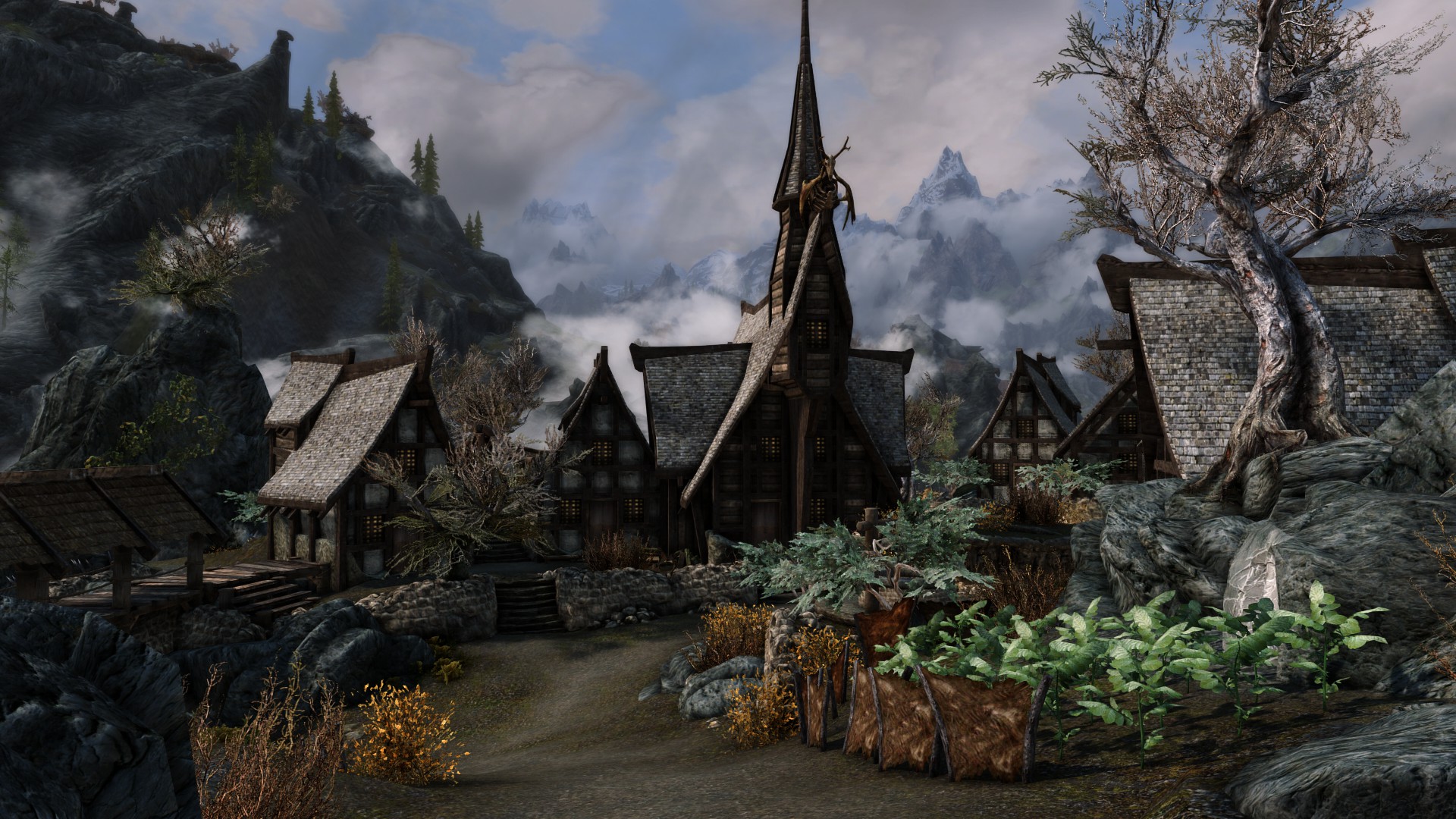 Mods like Sneak Tools and Magistrate Levitateallow you to climb anything or float anywhere, respectively.

These architectural changes are matched with AI improvements for the citizens of Skyrim. Using AI Overhaul, Librum makes townspeople act like real townspeople. People will spend the day hunting, farming, traveling, shopping, or cooking (or whatever else they want to do), depending on their profession and the circumstances. Friends and family may gather at the local tavern or for shared meals, for instance. People will more realistically mourn the loss of a friend or loved one. They’ll pray at temples associated to their faith. They may even act realistically during combat (and sometimes run away). Of course, the AI effects of the above mods are magnified by Realistic Conversations, Relationship Dialogue Overhaul, and Guard Dialogue Overhaul, which make normal citizens and guards not sound like robots or maniacs.

Librum overhauls specific buildings, as well, with Palaces and Castles Enhanced, Distinct Interiors, Immersive College of Winterhold, and Immersive Fort Dawnguard. Overall, these mods give a more hand-crafted feel to the world of Skyrim; many of Skyrim’s interiors have been totally redesigned, with hand-placed objects, furniture, and lighting, and with elements unique to their location or purpose. Stores will now have goods on display, for instance, and inns and other regional establishments will be decorated according to their respective regions. 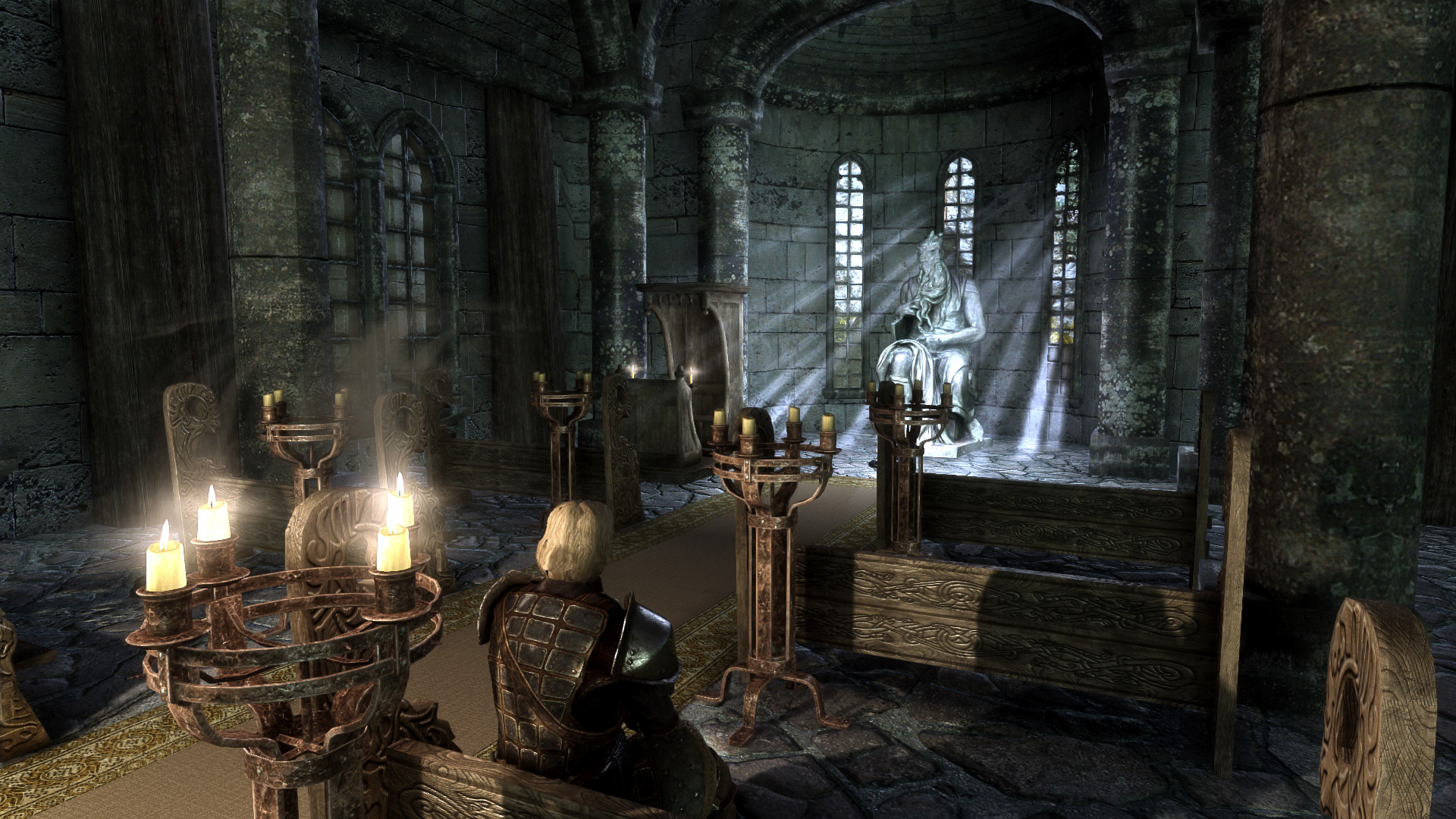 Last but not least, Skyrim’s wilderness has also seen some improvements. Along with the hundreds of new dungeons and locations mentioned in the preceding section, several existing locations have been redone. For one, Nordic Ruins of Skyrim improves the exteriors of several key ruins around Skyrim: Forelhost, High Gate Ruins, Korvanjund, Labyrinthian, Ragnvald, Rannveig’s Fast, Saarthal, Valthume, and Volskygge. These legendary ruins now look legendary, and they can all be seen as such from a great distance. The same has been done for Dwemer ruins, using Better Dwemer Exteriors – as with the new Nordic ruins, these now have greatly expanded (and much more imposing) exteriors.

Librum also includes Man Those Borders, Unique Border Gates, Hold Border Banners, and Immersive Dawnguard Dayspring Pass, to make the transitions between different holds and the journeys through wilderness zones a little more unique. Guards will now be stationed where they ought to be, and each hold can be identified by its flags and architectural styles upon arrival. Also, the entrance to the Dawnguards’ territory is no longer a stupid piece-of-shit hole in a cliff wall. 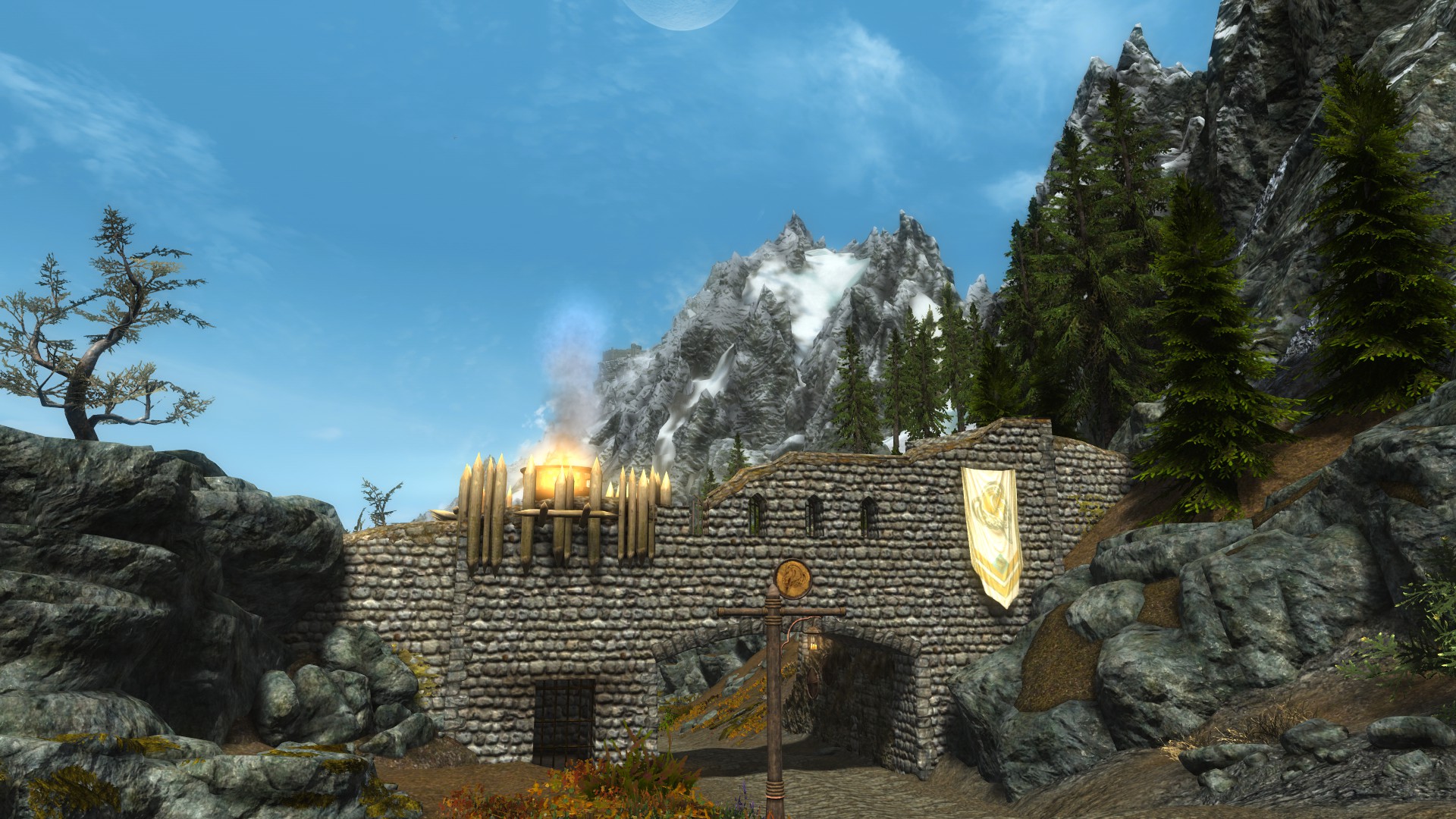